If you need to get help with your FOIA issue, please reach out and one of our attorneys will review your case.

Lee|Coats Law’s lawsuit against the Town of Big Cabin was settled yesterday with a judgment entered against the town with the town being ordered to pay $10,000 in attorney fees to Plaintiffs.

In July 2020, twelve citizens of Craig County sued the Town of Big Cabin for numerous violations of the Oklahoma Open Meeting Act. The Plaintiffs were represented by Josh D. Lee of Lee|Coats Law in Vinita, Oklahoma. During the COVID-19 pandemic, the Town locked down their city council meetings and would not let citizens in to watch the council meetings, nor did they provide audio or video broadcast of the meetings. Interestingly enough, they did allow the mayor’s wife to attend the meetings even though other citizens were excluded.

The town first sought to have the lawsuit dismissed on procedural and substantive grounds but that attempt was denied by District Judge Shawn S. Taylor on December 11, 2020. This cleared the way for the lawsuit to continue and begin discovery.

As part of the case preparation, Plaintiffs discovered a piece of evidence where one of the Town’s Board Members had inquired of the Town Clerk if they were violating the law. See the document below. However, they did not change their practice of excluding citizens from their public meetings.

Eventually, the parties settled the lawsuit and on September 30, 2021 judgment was entered against the Town of Big Cabin. See below for link to the document. The Town agreed that at a trial a judge could find that they violated the Open Meeting Act on four different occasions. Big Cabin was also ordered to pay $10,000 in attorney fees.

Our elected officials need to remember that they work for the citizens. Open Meeting and Open Records laws were enacted for the benefit of the public because a government run in secrecy is a dangerous thing. We congratulate the Plaintiffs and commend them for standing up for their fellow citizens and reminding the Town of Big Cabin leadership who they are elected to serve. 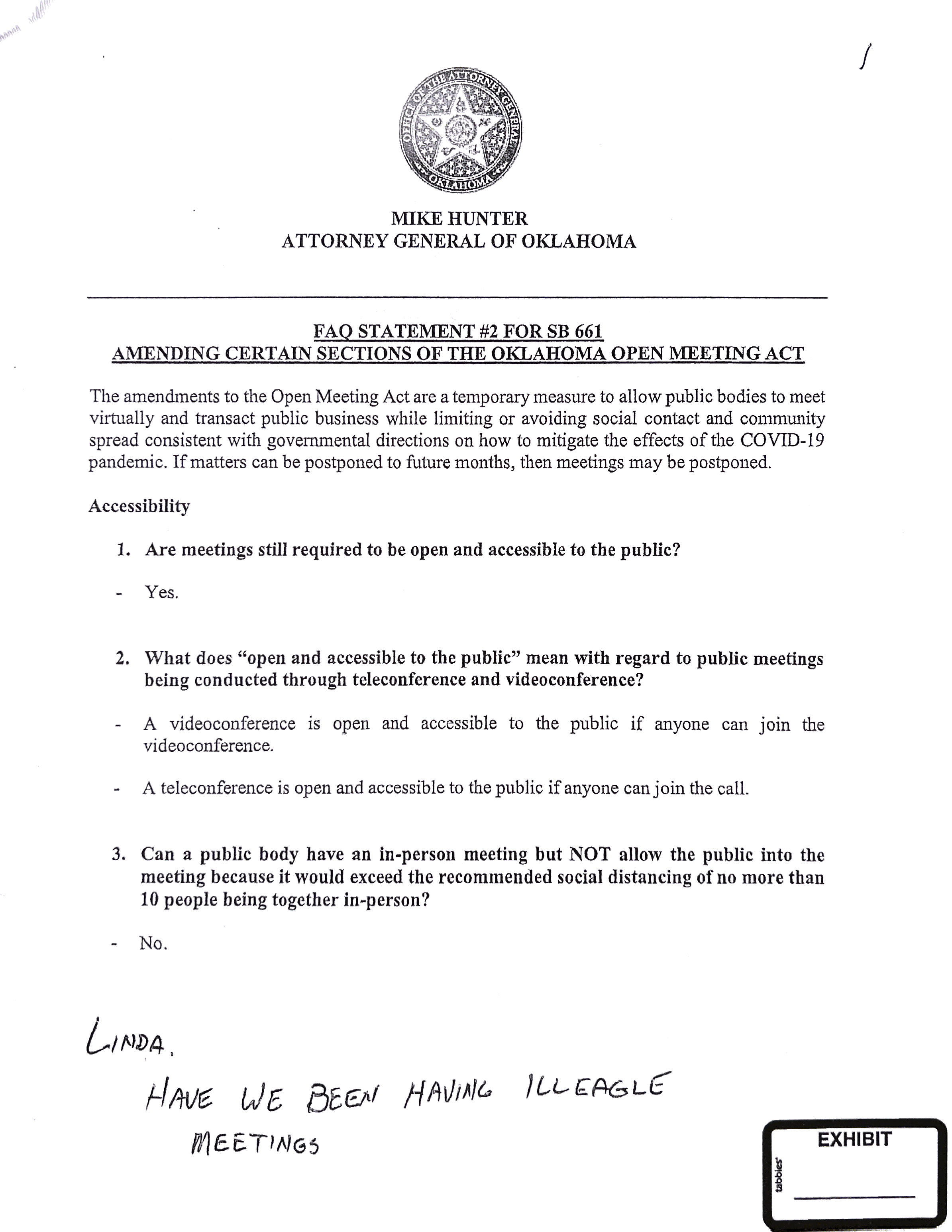 Journal Entry of Judgment filed against the Town of Big Cabin

Want to get notifications of new statutes, cases, opinions, and more? Sign up to our newsletter to get alerts right in your inbox.